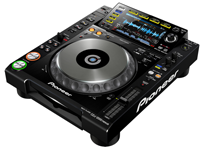 A CDJ is simply this: a digital CD turntable. As time has passed the Technics 1200 turntable came and took hold of the DJ world and didn’t let go for many, many years. Vinyl was king during the rise of the DJ and as time has passed and technology grows, we have seen the decline of vinyl. As computers and digital hardware became available and accessible for DJ’s the introduction of the CDJ put the final nail in the vinyl coffin. There are still vinyl purists and the sound and beauty of mixing records will forever live on. Today though we see a new generation of DJ’s who have switched from vinyl and embraced players suited for digital WAV or MP3 files.


Modern CDJ’s allow a DJ to play many different audio formats from not only burned CDs or DVDs but also from USB drives or external hard drives. Usually a turntable DJ switching to a pair of CDJ’s will find themselves quickly at home. Most CDJ’s have a platter in the center, start/stop buttons in the bottom left, and a pitch slider on the right side. This layout is reminiscent of a standard turntable layout, but that is where the similarities begin to split. Modern CDJ’s feature things like multiple cue points, built in sampler, pitch range control, wave form display, track organization, USB inputs, MIDI control, linking players for audio file access from one source, DVD playback, and more.

If you are a DJ who is looking to enter the digital DJ age but doesn’t want to loose the heritage of standing behind two turntables and a mixer then CDJ’s are the obvious choice. There are many players by different manufacturers out there and you can find players with a wide range of features and to fit any budget.